Two Merge Into One 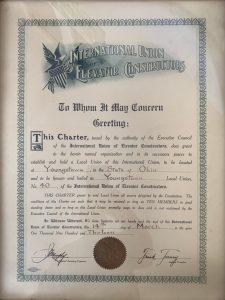 Youngstown, Ohio, known in the early 1900’s as the center for steel production and located in the region of the United States known as the Rust Belt. The establishment of the steel mills made this a popular destination for immigrants, causing both a population and manufacturing boom.

In response to this increase, in March of 1913, a Charter was issued by the authority of the Executive Council of the International Union of Elevator Constructors for the establishment of the Youngstown Chapter, Local 40.  This Chapter was established to serve the areas of northeast Ohio and western Pennsylvania.

By 1930, Youngstown’s population was 170k and was the 45th largest city in the United States. From 1920-1960, Youngstown was known as an important industrial hub and featured massive furnaces and foundries.  But Youngstown, unlike other Rust Belt cities, never diversified so when the economic changes forced plants in the area to close, there were few alternatives for industry. 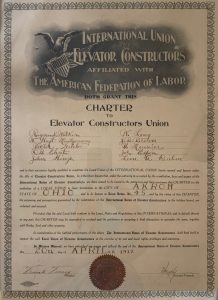 Akron, Ohio, known in the early 1900’s as the Rubber Capital of the World and also located in the area of the United States known as the Rust Belt.  The rubber industry brought thousands of workers, immigrants and executives to the area.  Rubber manufacturers built neighborhoods to house their workers.  At this time, the city was headquarters to four major tire companies.

Again, the IUEC responded and, in April of 1917, a Charter was issued by the authority of the Executive Council of the International Union of Elevator Constructors for the establishment of the Akron Chapter, Local 45.  This Chapter was established to serve the areas of northeast Ohio.

The decade of 1910 lauded Akron as America’s fastest growing city with over a 200% increase in population.   Akron had 208k citizens with nearly one third of the population immigrants.  The 1950s and 1960s created a surge in manufacturing in response to the automobile industry.  By the 1990’s, there was only one rubber manufacturing plant left headquartered in Akron.

The next 70 years included the inductions and retirements of many brothers, officers, and business agents.  In 1987, realizing the need to respond to the decrease in manufacturing and building coupled with decreased housing, the Local 40 and 45 considered their options for remaining viable.  In August of 1987, 28 Local 40 members merged with the 66 Local 45 members and kept the Local 45 Charter.

Today, the territory covered by the two unions includes 15 of the 88 counties in Ohio and two in Pennsylvania.  Local 45 has 82 members and the office is located in Kent, Ohio.